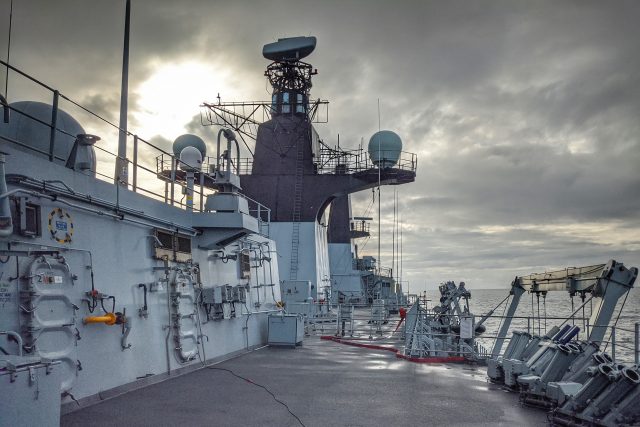 30/11/2019Giles LetherenBlogComments Off on Thursday War

I am not a morning person, so the alarm going off at 5am was properly unpleasant. Within the hour I was on my way out to sea with 3 other civilians and a couple of dozen professional sailors. As signatories of the Armed Forces Covenant Delt have long supported both former military personnel and reservists and we’d been invited to join HMS Albion for the day. As part of Flag Officer Sea Training the crew of Albion had spent the previous four weeks training, not just for everything that could go wrong but for when it all goes wrong at once. Today was exam day where all the practice was going to be tested.

Arriving on board to hear a warning of mines would have been truly alarming if it hadn’t all been pretend. It didn’t feel much like pretend though. The crew had been up for hours at ‘action stations’ and were all wearing anti-flash gear and looking serious. Albion was surrounded by a number of smaller ships, apparently protecting us from a marauding submarine. On a fairly regular basis throughout the day, bad things happened. The warning of ‘brace, brace, brace’ results in everyone grabbing hold of something. I caught myself hanging onto a desk despite knowing there wasn’t actually going to be an impact. There were fires, there were floods, there was the constant threat of incoming missiles (which were fast jets pretending to be missiles). Helicopters came and went. Everyone stayed calm. At one point the Bridge was on fire, and evacuated. Everyone seemed to know what to do. It was astonishing to watch a team who all knew their role, whatever was thrown at them. The only degree of stress I noticed all day was a sailor swearing (rather quietly) when he found the route to his destination blocked yet again by fire. ‘Running out of routes…’ he added as we watched and then stepped through the door he had avoided. Fire apparently doesn’t prevent VIPs from getting to lunch. However, passageways were full of fake smoke, which is disconcerting. More so when all the lights go out. That makes it difficult to see the ‘injured’ sat on the floor in corridors. They always apologised nicely if we stepped on them.

Rather than a silver service lunch in the wardroom we joined the rest of the crew in ‘Action Messing’, which is how you feed the whole crew when in the midst of battle. 25% of the crew are fed at any one time, you have seven minutes to collect your food, eat and clean up and then it’s back to work. We were done in just over six minutes. In eating at least, we could keep up with the best of them.

After lunch things got properly serious. We watched from a location that manages damage control. There was a big display showing all the decks of the ship. Anything in red was on fire. Anything in blue was filling up with water. Almost constantly, alarms were going off identifying some other problem. The display got more red and more blue. Everyone was calm. The lights went off again.

To cut a long story short, we didn’t sink or stay on fire. I didn’t fall into an open hatchway or get wet whilst testing my non-existent night vision by stepping off the side of the ship whilst boarding a landing craft, in the pitch black. The ship achieved its mission and dispatched Royal Marines by landing craft and helicopter. It was a genuinely impressive display of people working together and I was left thinking about what lessons the corporate world could learn from the way we train our military. The thing that surprised me most was that throughout the day I never saw anyone ask anyone else what they should do or if it was ok to do it. They simply informed others what they were going to do. Lots of information was communicated and constantly filtered. If it didn’t impact the mission the Captain didn’t need to know.

This level of confidence and trust is something I haven’t seen in business. We could learn from this. In my world you often find that everyone wants to know everything, but in the midst of battle, this crew were only concerned about what they needed to know to do their own job.  The absolute focus on mission, which is perhaps more common in the corporate world was as elegant as I’ve ever seen. Many corporate management teams would benefit from seeing this sort of real teamwork.

It was both an honour and a privilege to spend a day at Sea with the Royal Navy and I’d commend it to anyone who gets the opportunity. I’ve tried to lead my life in a way that results in people shooting at me on a very irregular basis but I do know that if I ever find myself in a sticky spot and in need of rescue – of anyone in the world I’d want the British Armed Forces to be the ones to come get me.