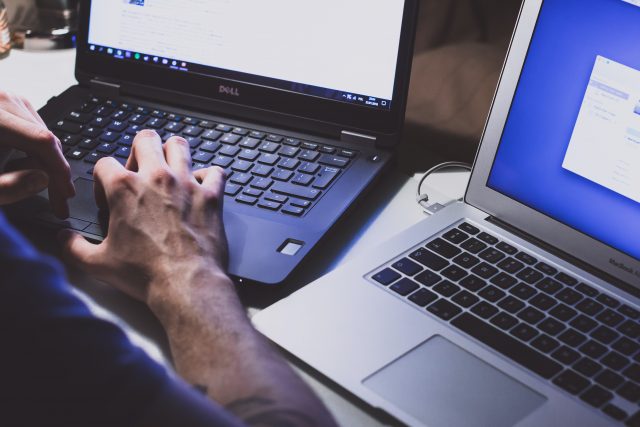 06/01/2022Sam SelbyBlogComments Off on Computers Can Do Astonishing Things

Computers Can Do Astonishing Things

Stay with me on this one… Let’s start off with a very small camera, taking an admittedly black and white and fairly low-resolution picture. Let’s call this Picture 1.

Then take another one but from a slightly different place. We’ll keep it simple and do this in only two dimensions rather than three. But in the second picture, the camera can have moved in both x and y by a little bit, or quite a lot.

Now to do some computing!

Take the first picture and shift everything up one pixel. Does that match Picture 2? No? Then move everything across a pixel. Does that match now? If not, keep moving Picture 1 around until you get a match. When you get a match, by the magic of maths, you’ll know how far the camera has moved. Now repeat the whole process, but quickly. About 1,000 times per second quickly. That’s a lot of maths. Probably needs a big, expensive computer, right? No, because that’s roughly what’s going on inside an optical mouse, like the one you might be using right now. A mouse like the one I can currently buy on Amazon for £5.39 (including next day shipping).

That something so complicated and needing to be done so fast can be achieved in a device that appears to cost much less than the sum of its parts is some kind of weird computer magic. Is there nothing that can’t be done better, faster and cheaper with computers?

People can do astonishing things too. I’m a fan of Cirque du Soleil, but behind all their theatrical magic, the shows would be little to nothing without the amazing things a trained human body can do. Things a normal person could never do. Even somebody much smarter and stronger (and lighter) than me.

Just recently I have learned how to ride a bicycle. It’s not what you might be thinking! I learnt to ride a bike at the age of 5 but I could not tell you how I did it. It just happens. I have taught both my children to ride bikes and was able to do so successfully without having any idea about what to tell them to do. Yet what is going on, is not unlike what’s going on inside the mouse. Lots of calculations being made very quickly but in three dimensions, not just two. Immediate corrective action being applied when any of those calculations is out of spec. Did you know that you cannot turn a bike right without first turning it left to unbalance the whole system? It’s the recovery from that instability that allows you to turn. Try and turn right without first moving the handlebars to the left (just a bit) and I will not be held responsible for the medical consequences.

The act of riding a bicycle, driving a car, walking upright or any number of apparently simple things is evolutionary computational mastery. That said, I’m pretty sure a computer could ride a bicycle, probably really well. Computers don’t get sick, tired or grumpy. They are happy to work long hours, or on holidays. They don’t fall out with other computers. My life would be about a million times easier if Delt employed 200 computers instead of people.

But, and in this case it’s a huge, flashing neon but, there are some things that computers really aren’t very good at. One of them is answering the phone and fixing problems with computers. There are elements of technology support that can be automated and actually serve to benefit the consumer, not just the supplier. However, when somebody needs help, then the best way to get them working again is usually through a conversation with one of those utterly brilliant pieces of evolutionary computational mastery – a person

A person who understands that you are frustrated, have work to do and really don’t want to engage in a machine led ‘Simon-Says’ with as much empathy as a brick to the face.

We sometimes use recorded messages – if we have a big outage for example, but beyond that we try to answer the phone in person and quickly. It is our job to get you up and running again with minimum frustration, and the best way to do that is by talking to you, one on one.

It’s no surprise that this approach (or rather the cost of it) comes in for some criticism but there is little point in providing a lower cost service, if the way we do it is by pushing the costs straight back to the customer in the form of increased non-productivity.

For now, despite the astonishing things that computers can do, we’ll continue to take the position that there are some things that people do better.

Photo by freestocks on Unsplash